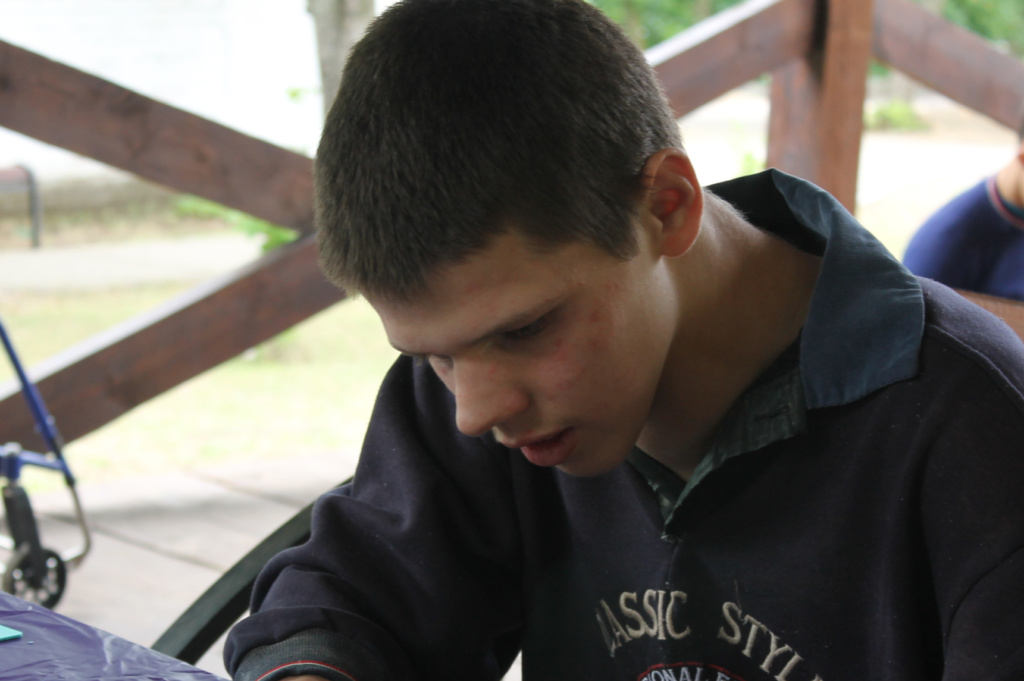 Serhii is one of the few guys not wheelchair bound, a great helper.
He may qualify as non-verbal, but that doesn’t stop him from trying. Over the years those that cared have worked with him, helping him to communicate in one or two word phrases and gestures.

I was first introduced to Serhii, by the director of the orphanage in Oleshky, and it was not to Serhii himself, but to the crafts he was making. Serhii would get bored to tears just sitting doing nothing all day, and by the end of the day, the nannies taking care of him would find some part of his clothing ripped off and missing, or a towel misplaced and gone. A day or two later when the sheets were changed, or clothes were sorted through, dolls would be found. Without needle and thread, without lessons or teaching, he would make these little figures or animals like dogs with the resources he could find.

Once his creativity was discovered the nannies and staff were thrilled to supply him with any and every resource they could find for him, but this ruined it for Serhii. Many of the materials he was extremely allergic to so the one caretaker that oversaw him through the day time ended up taking every resource away from him, because of the allergic reactions he was having to materials.

As volunteers, we tried to provide a source of creativity to him through “acceptable materials” but his desire to create was soon greatly diminished. Serhii was moved out to Kiary, an institution that can house up to 500 men, but currently has 356 living there. He always has a smile for us when we come to visit, and though when he was first moved, his allergies and hay fever were out of control, he’s finally on the right medicines and dosage to help him, so he’s not miserable. His friend Slava was moved at the same time but are in different parts of the institution now; these two guys will share space together once again very soon.